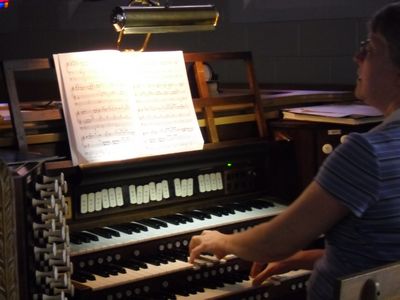 From the time of Martin Luther in the 1500’s, Lutheran Christians have sung the hymns of the church accompanied by an organ.  Thus we would expect the same tradition to be carried forward by the German immigrants who came to the Sebewaing area in the 1850’s.

Rev. J.J.F. Auch, Immanuel Lutheran Church’s first Pastor, led our members in worship in a log cabin which served the congregation for many years, during which time it was enlarged with a frame addition.

The church’s records do not state specifically whether or not services in the log cabin included an organ.  However, since it is known that Rev. Auch was able to play, it is probable a reed organ was installed at an early date.  When Teacher Kuch was called in 1871, he was informed his duties would include organ-playing in the church. 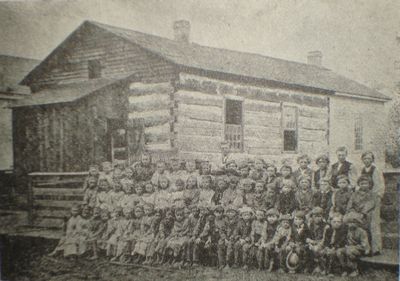 Immanuel's log cabin church with Teacher Kuch and his students

When the congregation’s worship space in the log cabin became too small, the cornerstone was laid on July 21, 1873, for a new building.  The new white frame church was dedicated on November 16, 1873, shortly after the arrival of a new Pastor, Rev. J.L. Hahn. 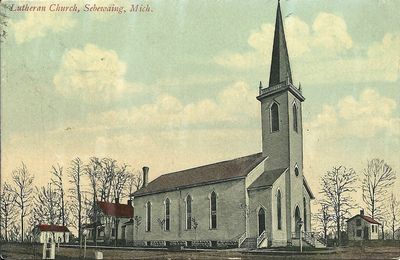 In 1882 our congregation purchased its first pipe organ. It had two manuals (keyboards) and was built by the Felgemaker Organ Firm of Erie, Pennsylvania.  The cost was less than $1,800.00.  A person was hired for $15.00 per year to pump the bellows in order to maintain the wind pressure while the organ was in use.  Later, this job was a regular duty of the janitor, but in 1915 an electric blower was installed which relieved the custodian of this task.  The Felgemaker organ served our congregation until 1950. 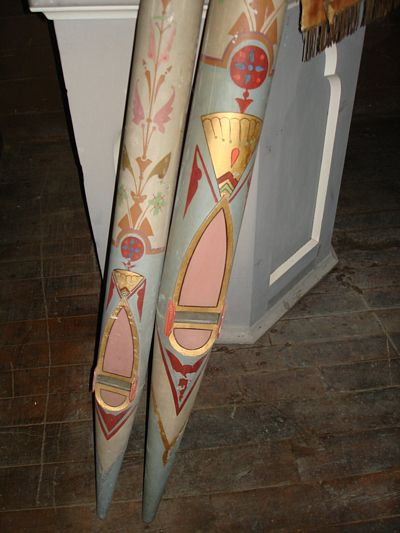 Two organ façade pipes and lectern from the old church

In 1951 Immanuel Lutheran Church dedicated a new brick church building and a new pipe organ built by the Schantz Organ Firm of Orrville, Ohio. The organ, which is still serving our parish today, has three manuals and 21 ranks (sets of pipes).  All nine ranks (561 pipes) of the old Felgemaker organ were retained and included in the Schantz organ.  All pipes, both old and new, are enclosed in two chambers, one on either side of the chancel with each chamber having a corresponding expression pedal at the console.

On September 16, 1951, during an Organ and Choir Vespers Service, the new Schantz organ was dedicated.  Professor Carl Waldschmidt of Concordia University, River Forest, IL, served as the organist for that service.  He chose to play J.S. Bach's Prelude and Fugue in B minor and the Gigue Fugue in G major, as well as Widor's Toccata from his Fifth Symphony.  Immanuel’s Senior and Junior Choirs contributed several anthems.

In 1999 the organ console was enhanced with a Peterson multi-plex switching system, a 32-level combination action, a MIDI resource system, and a transposer.  These additions give the organist more flexibility.  New manuals and a new pedalboard were also updates made to our organ at that time.

Immanuel Lutheran Church has been praising our Lord for over 160 years.  We look forward to many more years of praise assisted by our beautiful Schantz pipe organ. 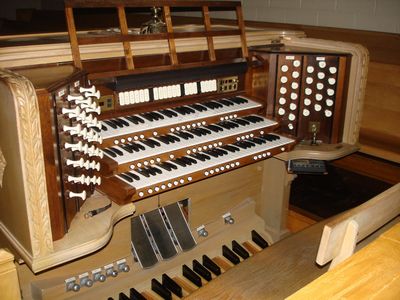